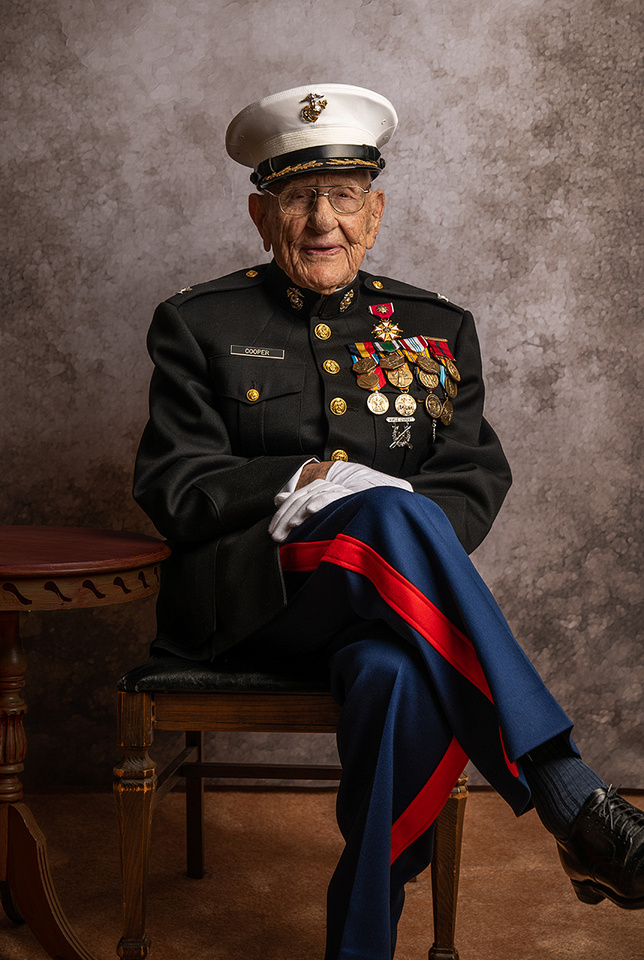 Col. Cooper enlisted in 1942 and served a total of 38 years in the USMC. Among his decorations is the Legion of Merit medal. After boot camp at Parris Island, training in North Carolina, Quantico, VA and Camp Pendleton, CA he boarded a ship bound for Guadalcanal. He also fought in the battle of Okinawa. After Okinawa, his unit moved to Guam to prepare for an invasion of Japan, until the dropping of two atomic bombs and the Japanese surrender ended the war. Col. Cooper was again called to active duty during the Korean War, serving in artillery and infantry, and during the Vietnam War, working mostly in training and recruiting in Washington, D.C. and California. He had a career later in education and coaching, and working with FEMA.

US Army PFC Cecil Greenwood (age 95 in this photo) 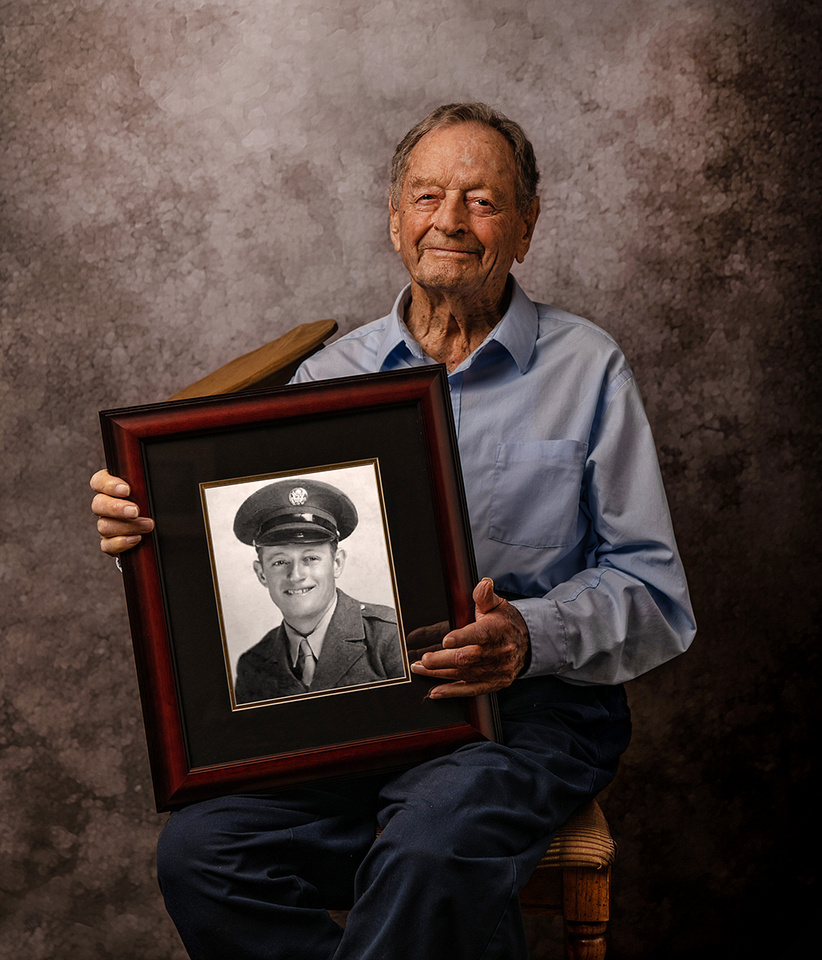 Cecil fought against the Japanese in the Pacific, including the battle on Iwo Jima. He is also pictured during his time of service. I got to see a Japanese battle flag that he took from one of the many tunnels found on Iwo Jima. He was able to return home to Fort Payne after the war and to his wife whom he had married while on his first furlough after basic training (they were married for 74 years before her passing in 2017).

US Army Cpl Gabe Kinney (age 98 in this photo) 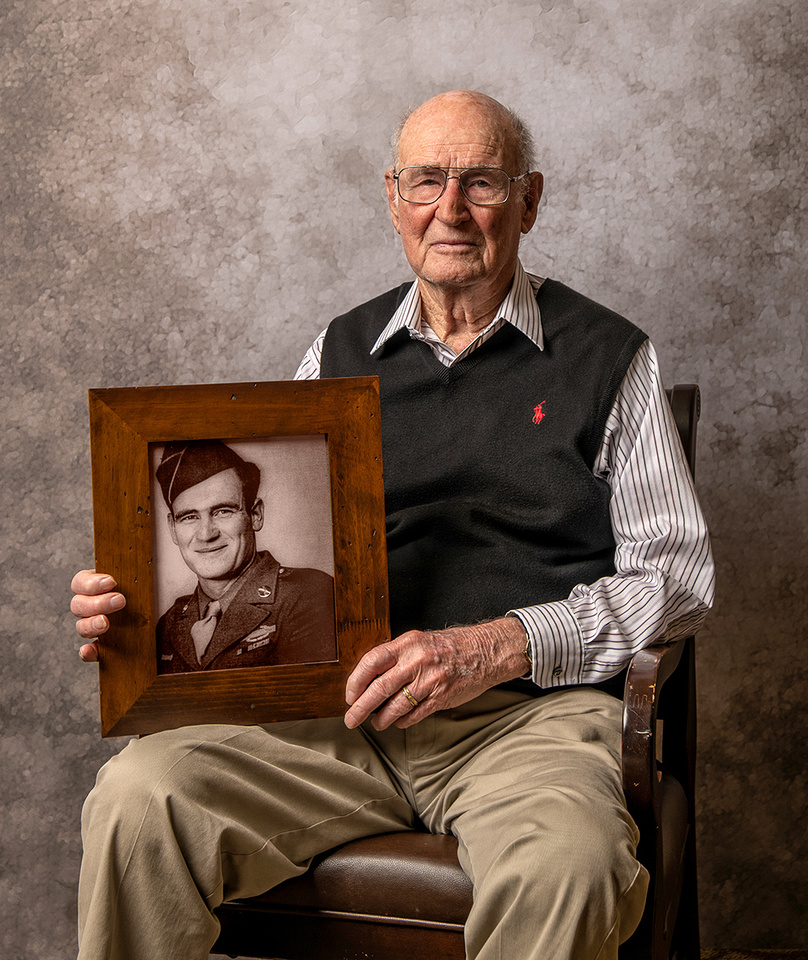 I didn't know much about Gabe Kinney before I met him other than he had been in the Army and fought in Burma with the group known as the Merrill's Marauders. I found an online interview he had made for the National WWII Museum in New Orleans about 5-6 years ago. It is 1.5 hours long, so I listened to it on my drive down. Everything I could have wanted to ask or learn about him was in the interview already. Fascinating information! The mission these men were asked to undertake was essentially a one way deal. It was estimated that 85% wouldn't make it back. I think they were somewhat forerunners of the elite Army Rangers we have now. They had to endure about 1,000 miles of walking through jungles, rivers, and mountains with low supplies, mules and horses to cut through and disrupt Japanese lines in Burma enduring snakes and leeches, heat, disease and hunger aside from fighting the enemy. Some 3,000 men at the start ended with only a couple hundred left after the tolls of those killed, wounded and sick with malaria and dysentery. After listening to the interview, I felt very intimidated and wasn't confident I could do justice photographing this old warrior. But, I didn't want to miss the opportunity to meet him. We all shouldn't miss these opportunities. It is an honor. So, meet him I did. And his lovely wife, and one of his daughters and sons-in-law. Gabe is a tall gentleman and very distinguished, reserved and cordial. He didn't talk much during our shoot which was in a sitting room down the hall from their apartment at the assisted living community they reside in. But, he did answer questions directly and was focused on allowing me to get what I wanted. I was still a bit intimidated. His family with us helped me feel more at ease. And Gabe himself was very nice. The more I was around him I felt somewhat like I was around my own father in his later years. And that was good.

Gabriel Kinney was born in February 1921 on Stouts Mountain, Alabama. His father was an immigrant from Ireland and his mother was an immigrant from Scotland. They met in Stouts Mountain and married there. They were very poor during his childhood and their world was much different than things are today. Kinney's parents had 12 children. Nine of them served during World War 2. Kinney lost his father on 10 January 1942. Six of the Kinney boys and three of the girls went in the service. Kinney was working for US Steel in Birmingham the day Pearl Harbor was bombed. Kinney had no idea where Pearl Harbor was. Initially, learning of the attack did not mean much to him. Kinney entered the service in November 1942. Early in 1942 he and three of his buddies from the mines tried to get into the US Army Air Forces to become aviation cadets. There was a long waiting list. The three ended up in the infantry instead and all went their separate ways. Kinney was inducted at Fort McClellan then sent to Camp Wheeler, Georgia for basic training. Kinney took his training under the leadership of a young Lieutenant McLogan who was just out of college ROTC. During basic training Kinney fired every weapon used by the infantry including the Browning Automatic Rifle. He ended up carrying the BAR throughout the rest of the war. (excerpted from WW2online.org) 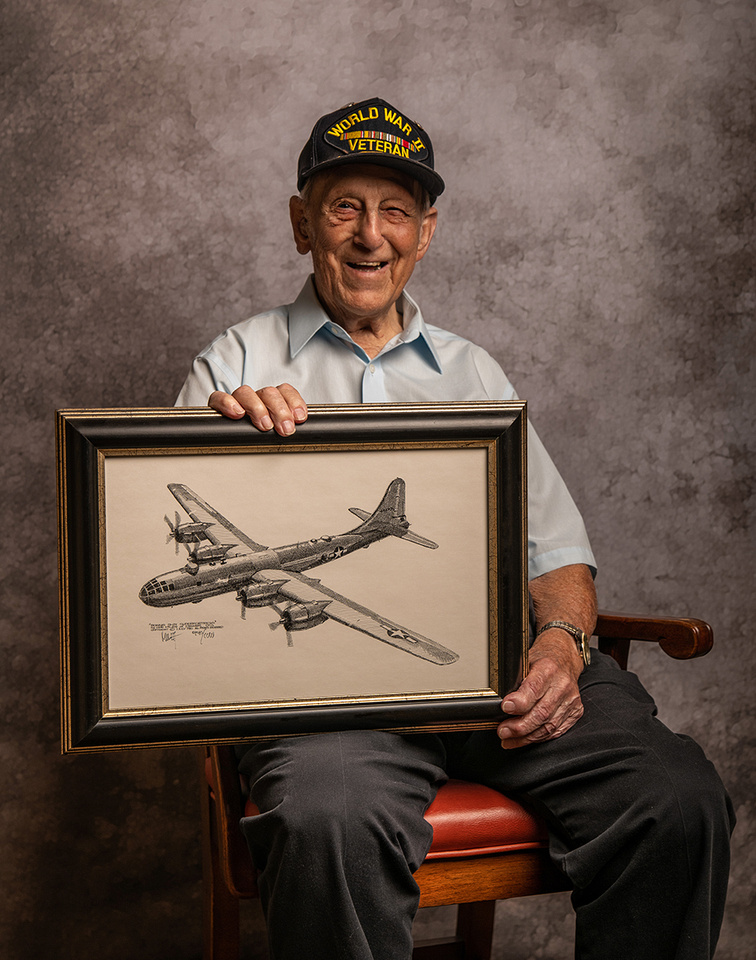 Warren Ellis is originally from Methuen, Massachusetts and he was drafted into the Army in April 1943 less than a year after he graduated from high school. After basic training in Miami Beach he had armament training in Denver, and Indianapolis for gun turret training on B-17, B-24 and B-25 aircraft. Then to Pratt, Kansas to a B-29 group, the 40th Bomb Group, 44th Squadron, of the 20th Bomber Command. He was a turret mechanic stationed in India, Tinian Island, Saipan, and Guam.

Warren recalls in his writings while in Chakulia, India, about 120 miles from Calcutta, "Our B-29s would load up with bombs and fuel, and when there was a mission in Japanese held China, or Manchuria, they would fly 'over the hump' which were the Himalaya Mountains, to what we called our forward base in China at Chengtu. I was scheduled to go there one time, but then got canceled. There were two planes that were loaded with bombs that were canceled, so on a Sunday morning they had to get crews together to unload the bombs, and I was supposed to go, but said that I wanted to go to church first, then if they still needed help, I'd be there. Just as we were getting out of church, there was a loud explosion, and saw a lot of smoke down on the line. The bombs were cluster anti-personnel bombs, and we found out later that one of the straps broke as one of the bombs was being lowered, and exploded, and hit the center gas tank, and that started the fire. The base fire trucks came rolling up, one in front of the wings on each side, and one on each side behind the wings, and just as they got there the whole thing exploded, and killed all the firemen, plus all our guys that were inside the bomb-bay. Those 2 planes were totally destroyed, plus all the other planes that were anywhere near them were badly damaged by shrapnel from the bombs and flying bullets. We lost about 12 guys from our outfit, plus the firefighters, and all the firefighting equipment." 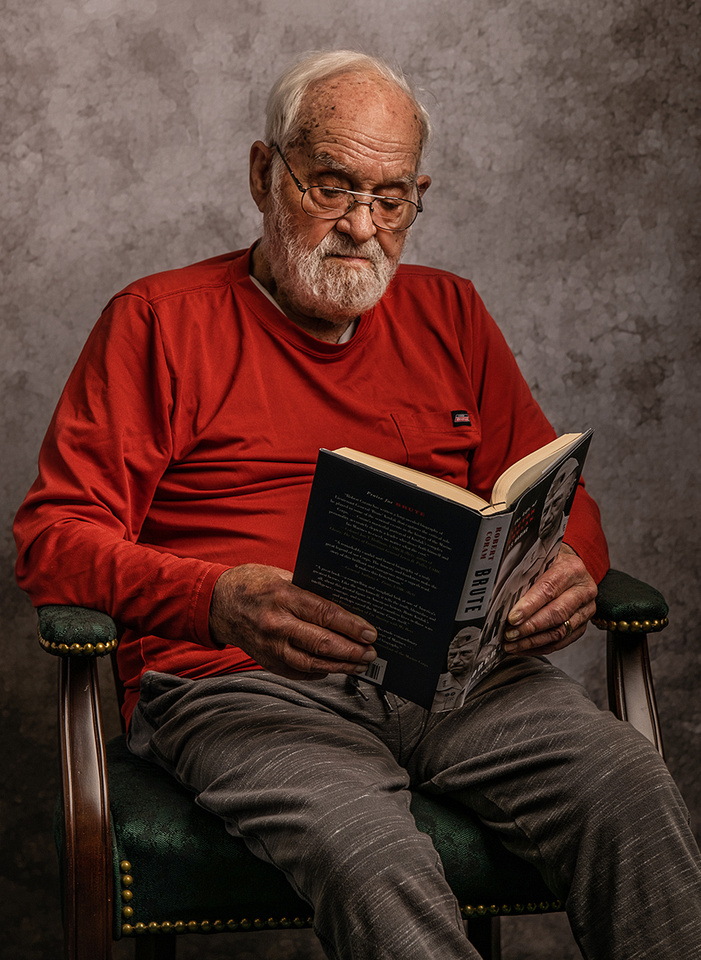 Mr. Hanse joined the Marines at age 19 and was a member of A-Company, 1st Engineer Battalion and fought at Guadalcanal and Peleliu as a Rifleman and explosives expert. He recounted times of his position being shelled daily by the Japanese in the months he was at Guadalcanal and thankfully receiving no injuries. But there was one time when his squad was taking cover in a bomb crater and a Japanese tank came straight into it almost running them over before they got out of it. He did take some shrapnel in his knee from an exploding grenade. But that didn't slow him down. It was malaria that did slow him and he was sent to Australia to recover from that before going to Peleliu Island where he said the U.S. had it's first offensive victory.

Ardell Johnson (age 92 in this photo) 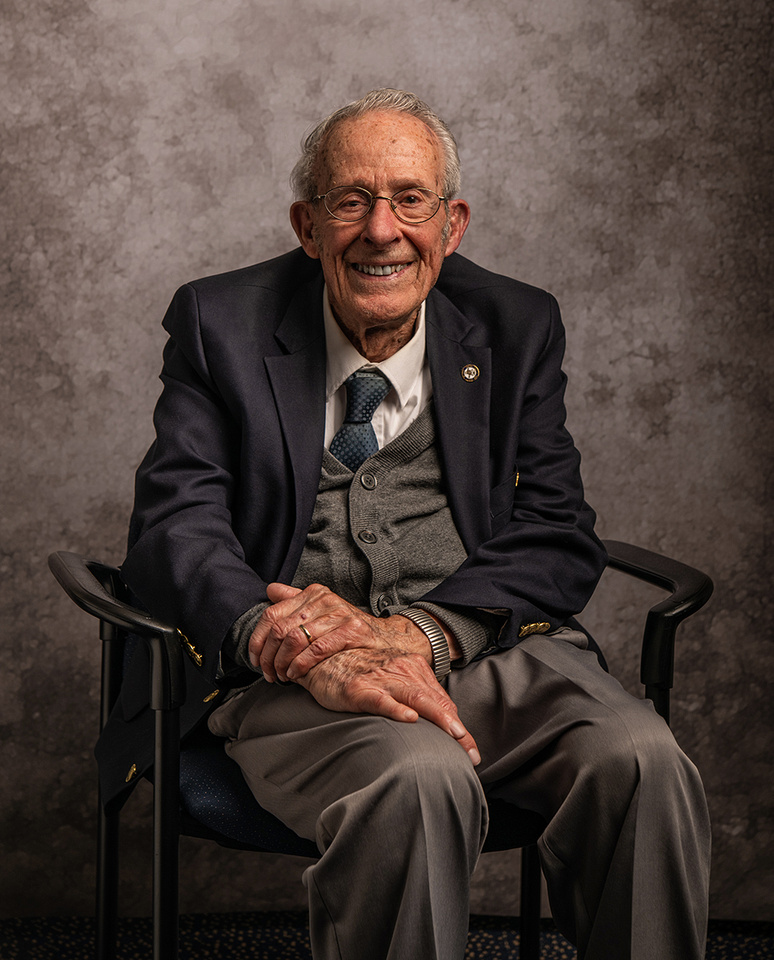 Gus served with the Army Air Corps as Crew Chief from 1943-1946 all stateside and was awaiting with his B-24 squadron to go to Europe until the war ended before they shipped out. Then planned to go to the Pacific, but then the war ended there, as well. He considers himself fortunate, indeed. 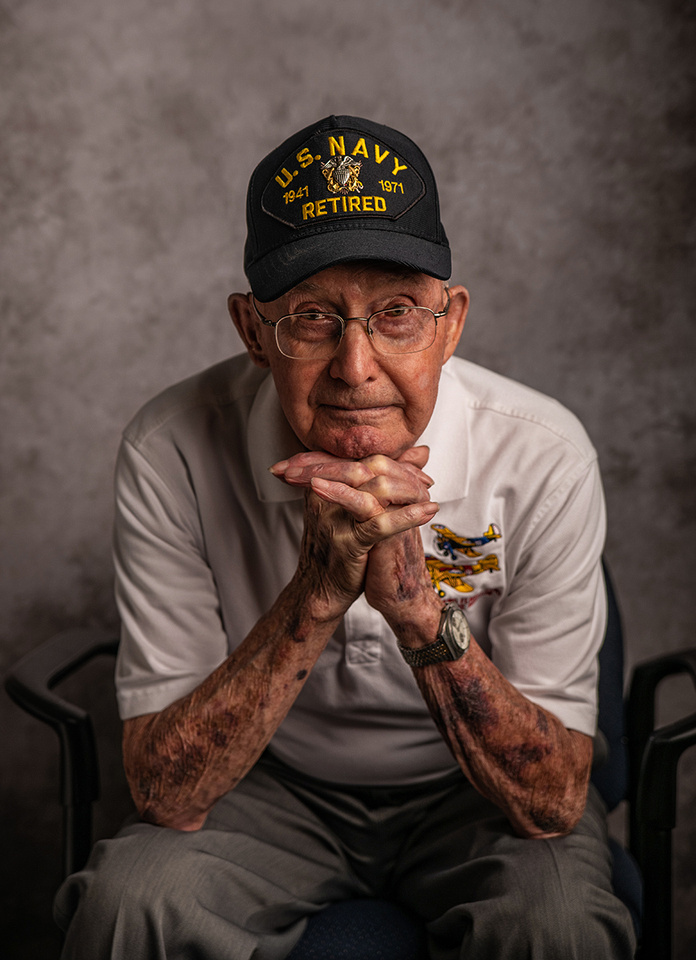 After graduating high school in Pueblo, Colorado and less than a month after his 17th birthday, Cash enlisted in the Navy in May of 1941. Arriving in Pearl Harbor on December 18, 1941, he witnessed the aftermath of the Japanese attack on Pearl Harbor and reported to VP-11, a PBY squadron at NAS Kaneohe Bay. He served in VP-11 as a PBY aircraft crew member in Pacific battles from Midway to the Philippines. 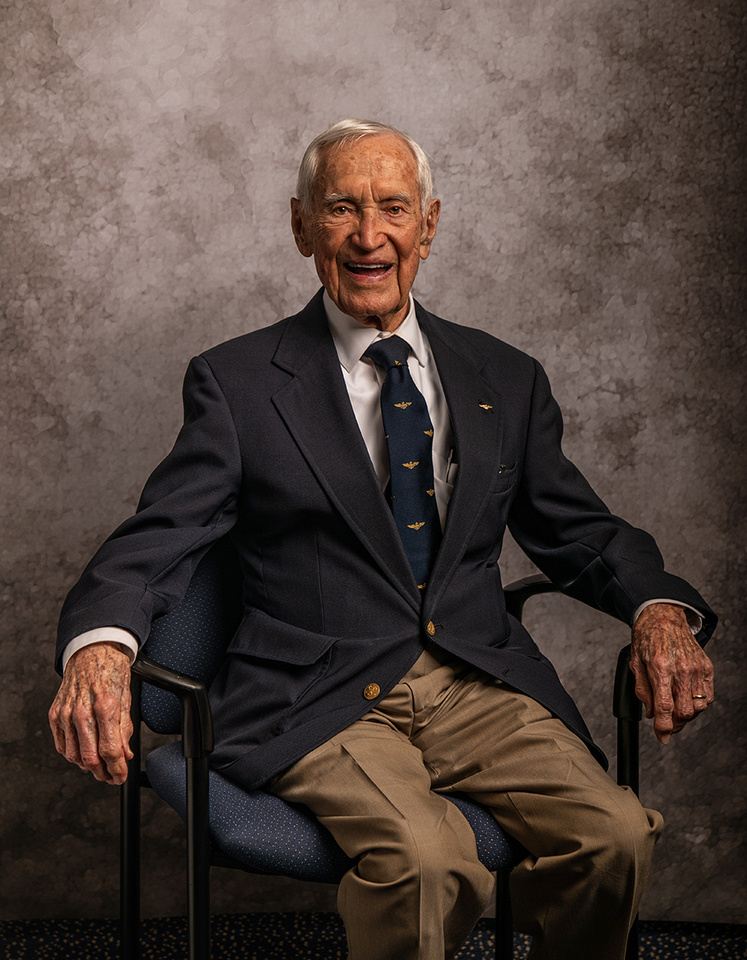 Navy pilot Dick Pace, whom I photographed in Pensacola last week at the National Naval Aviation Museum. It seems he's still got the energy of a much younger man as he told me stories of flying his F6F Hellcat fighter plane in the Pacific, taking off from and landing on an aircraft carrier. I'm also including a video I found of him made in 2010 when he was only 90-years-old.

US Army John Little (age 94 in this photo) 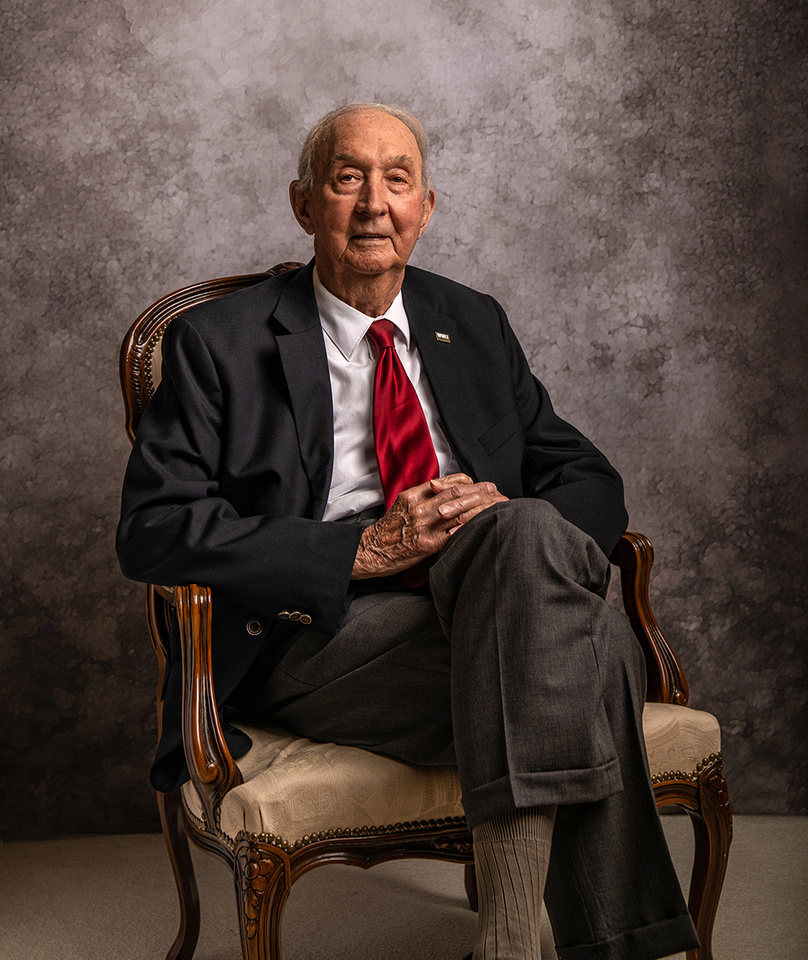 John was in the 34th Infantry Division C-Company and fought in North Africa and Italy, and was awarded the Bronze Star and Purple Heart.

US Army Sgt. Paul Johnson (age 94 in this photo) 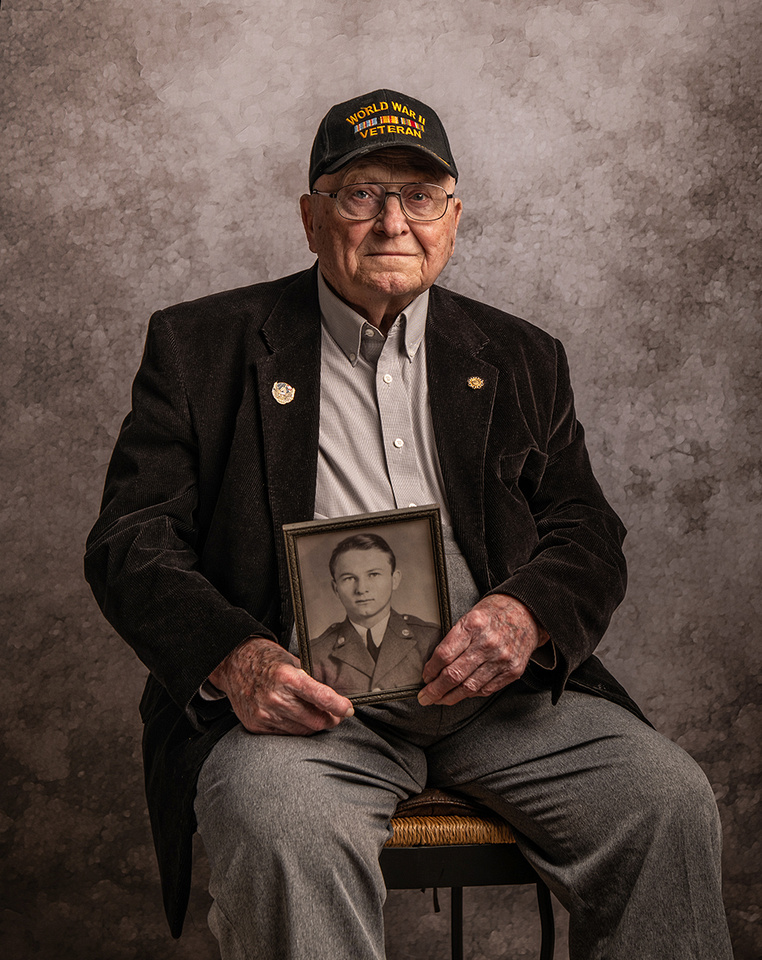 Paul Johnson served in the Philippines and fought in battles at Leyte and at Luzon with the 37th Infantry Division.

US Army Air Corps Virgil Mitchell (age 97 in this photo) 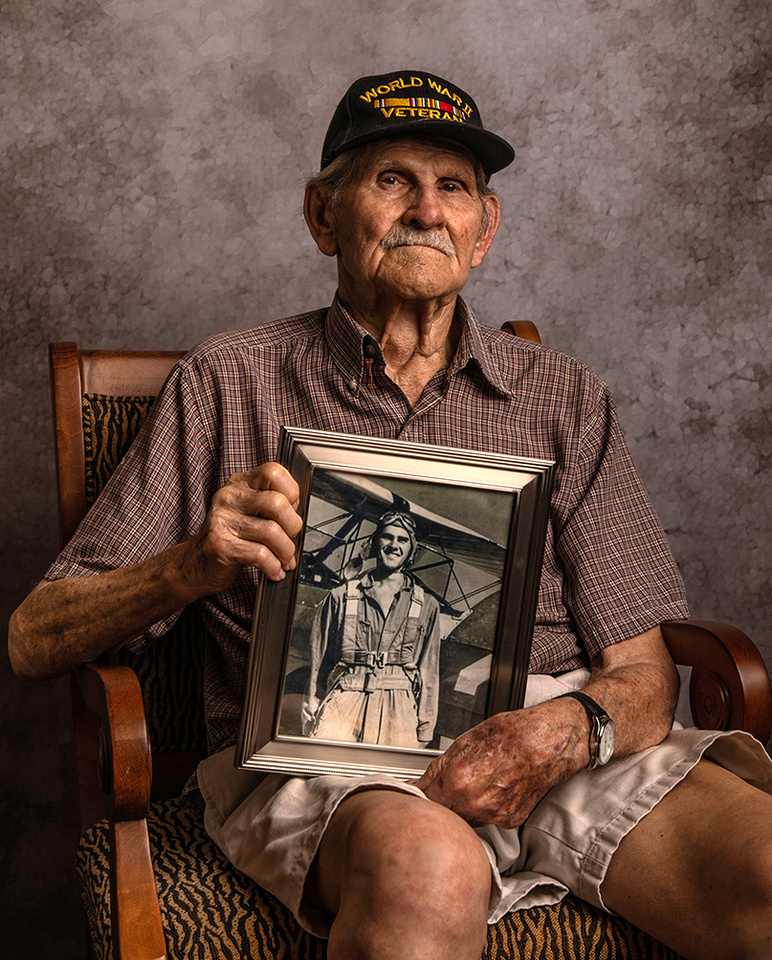 Virgil Mitchell is quite a character! He served in the Pacific Theater of Operations after volunteering for flight training as a pilot. He enjoyed the training until he got kicked out—think the movie Top Gun when 'Maverick' buzzed the tower, and maybe something about tossing oranges like bombs out of the trainer airplane at people on the ground—and then became a radar operator with crews on B-17Gs and other aircraft. He was in flight aboard a B-17 within 40 miles of Nagasaki, Japan when the second atomic bomb was dropped there and was able to see the mushroom cloud after it detonated. He was eager to show me the original flight log kept at that time, and a final map used in their operations at the end of the war.

US Army Airborne Don Minshew (age 90 in this photo) 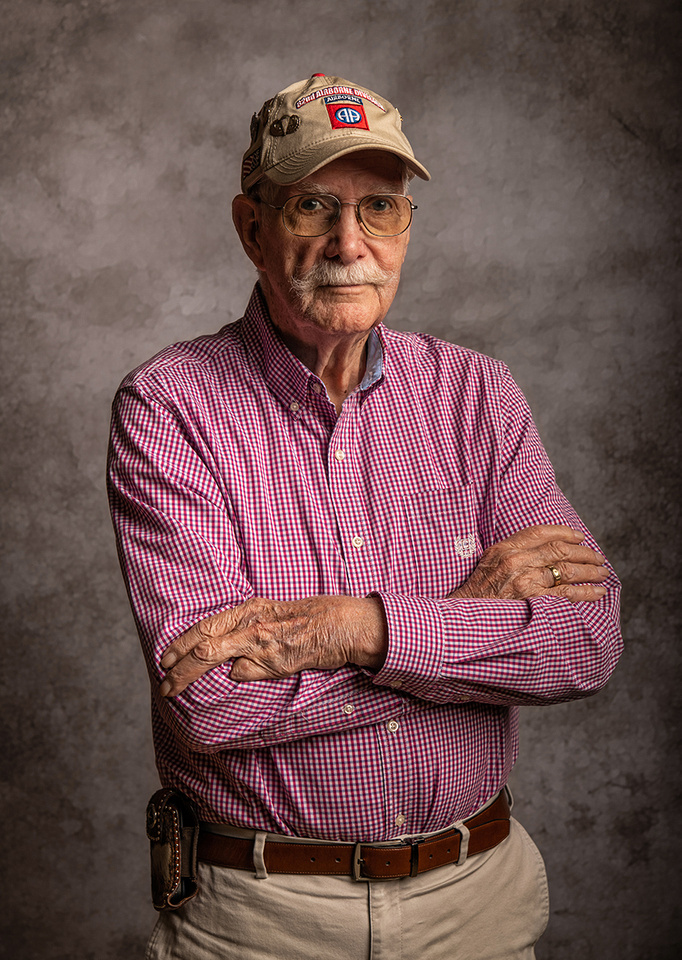 The youngest veteran I've met so far, Don Minshew forged his mother’s signature at age 15, claiming to be 17. “Still today the Army thinks I’m 92”, he told me. He fought with his new buddies throughout Italy, including the battle at Monte Cassino in early 1944, the toughest battle he had been in. He probably would have been involved in the D-Day invasion at Normandy if he weren't so "banged up" after Monte Cassino. He was raised tough in South Georgia—his son-in-law told me, “He lost his little and ring fingers when he was young, 10 or 11 maybe. He and his brothers would hop on freight trains coming through for a ride. His hand got caught once and it snatched those fingers off.” 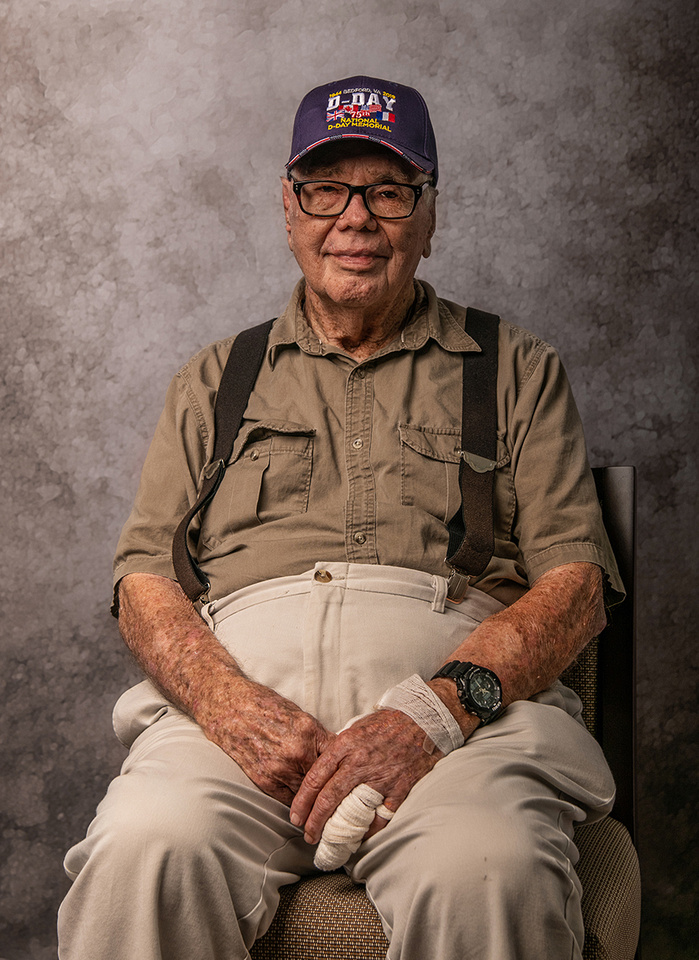 US Army Sgt. Edward Harrison  (age 99 in this photo) 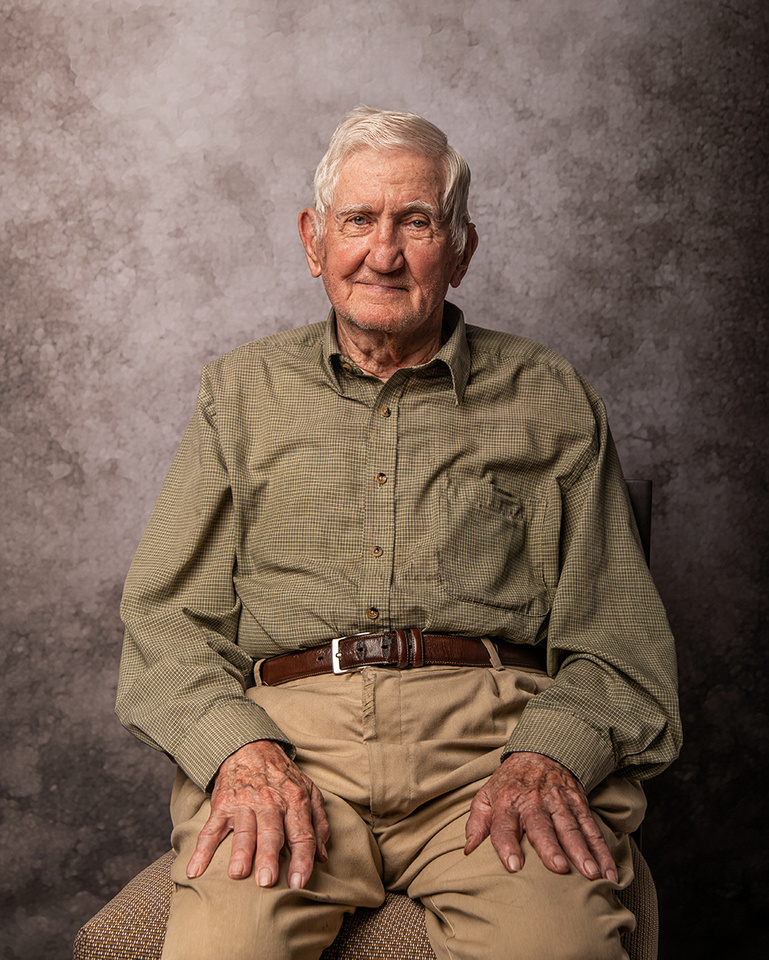 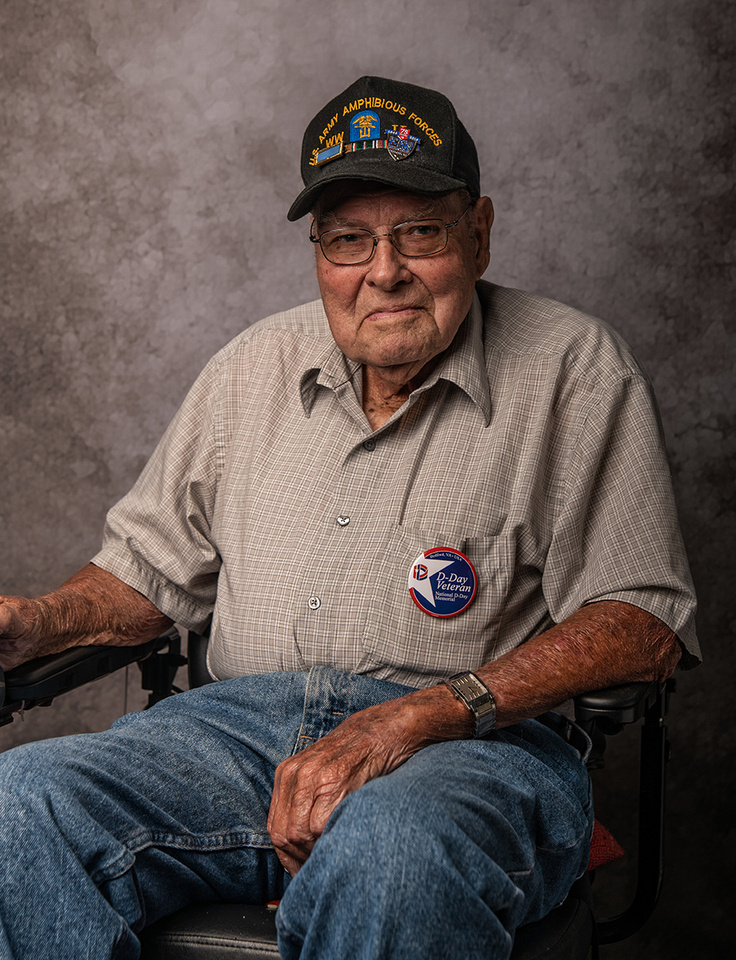 Hilman Prestridge was one of the first soldiers to land at Omaha Beach at Normandy on D-Day 75 years ago as part of the First Infantry Division. As soon as the front landing door on the Higgins boat was dropped going to the beach, heavy German machine gun fire began raking his buddies as they stepped off into the water. Many died right in front of the boat. So the rest began jumping over the sides instead. "We had these life preserver things called a Mae West around our waist. They were supposed to float up under our armpits when yu filled them with air., but because we were so loaded down with so much stuff, they couldn't do that and just hung around our waists. Lots of men died with their feet sticking out of the water because all that ammo and grenades and backpacks kept them from floating upright."